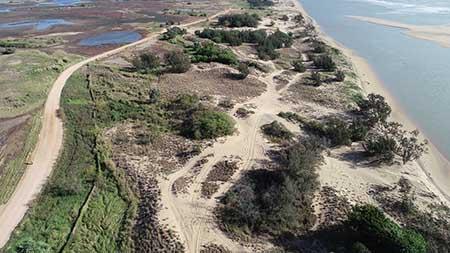 The Burdekin coastal system is renowned for its natural beauty and coastal processes.  It is an area highly valued by traditional owners, residents, and visitors alike.   The Burdekin coast has been the traditional home of the Bindal and Juru peoples for thousands of years.  The Gudjuda Reference Group Aboriginal Corporation now represents the cultural heritage of the traditional owners of the land, and their indigenous land and sea rangers undertake a range of coastal management activities including biodiversity surveys, turtle monitoring and protection, seagrass monitoring and maintenance of cultural heritage sites.

In 2020 Council developed a Dune Management Strategy to support ongoing coastal management throughout Alva, Wunjunga and the Beachmount Reserve.   The Strategy identifies areas for dune stabilisation and repair works including fencing and revegetation.

This Strategy builds on the recent Coastal Hazard Adaptation Strategy (CHAS), which aims to support the long-term management of the coastline.  For current residents, surveys undertaken within the CHAS show the most frequently visited areas to be Alva Beach, Wunjunga and Groper Creek.  Visitors have been travelling to the region since the early 1950s, using the beaches for recreation purposes such as fishing, beach driving and camping.  Of those surveyed, the majority identified the region’s natural ecosystems, wildlife and conservation, and unique landscape as having significant value.   A large proportion (over 70%) of the community believe that the Burdekin coastline will be impacted by coastal erosion or coastal flooding in the future.

Community consultation was held in September 2020 with the feedback provided incrporated in the final document. Council thanks the community for their participation.

The Strategy was approved by Council on the 15 December 2020 and is available here.  The Strategy Plans or maps showing the priority areas and activities for Alva and Wunjunga/Beachmount are available below.

A plan will now be developed for implementing the actions identified so that we can move toward stronger and more stabilised sand dunes.