The construction of the first Railway Bridge began in 1912 and was plagued by stoppages during its completion. The flooding of the Burdekin River was a regular cause of disruption. Large amounts of debris floating down the river often became trapped in the bridge structure and the immense weight would cause the bridge rails to buckle and bend. The bridge was officially opened on September 8, 1913 and was known as the Inkerman Bridge. Several floods over the next 15 years caused major damage to the rails of the bridge and took months to repair on each occasion. It was not only passengers aboard trains who were affected by these long delays but various types of goods were sometimes in short supply.

Road traffic between Ayr and Home Hill was limited in the early 1900s by the amount of water at the Bowen crossing. A low-level traffic-bridge was finally gazetted in 1929 after much pressure from Burdekin residents. The Traffic Bridge was constructed at the Bowen Crossing and although it served the district for more than 25 years it was regularly out of action because of the rising river.

The long-awaited new high-level road-rail Bridge construction was started in April 1947. During its construction local residents and tourists longed for the completion. Construction included many obstacles, the main one presented by the absence of rock in the river bed. The construction team was forced to sink huge concrete caissons to depths of over 30 metres. 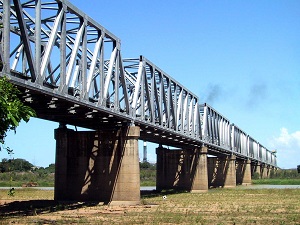