What is a storm surge

A storm surge is a rise above the normal water level along a shore resulting from strong onshore winds and / or reduced atmospheric pressure.

The combination of storm surge and normal (astronomical) tide is known as a ‘storm tide’.

The worst impacts occur when the storm surge arrives on top of a high tide and when this happens, the storm tide can reach areas that might otherwise have been safe. Additionally there are pounding waves generated by the powerful winds.

The combined effects of the storm tide and waves can destroy buildings, wash away roads and run ships aground. 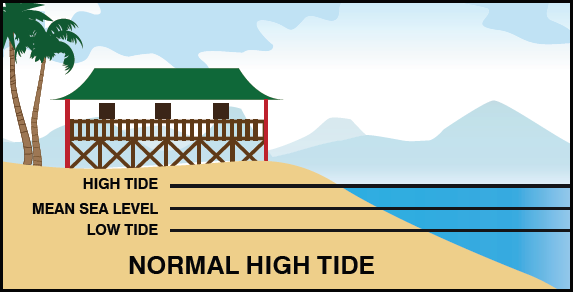 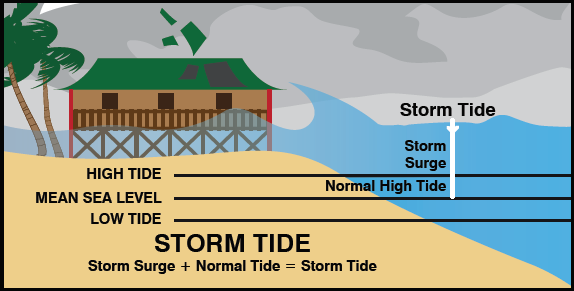 The paths of cyclones are often unpredictable, which makes it hard to forecast exactly when and where a cyclone will cross the coast. This makes it difficult to predict how high the astronomical tide will be when the storm surge impacts, since the time difference between high and low tide is only a few hours. The Bureau of Meteorology issues warnings to the public that are based on the ‘worst case’ assumption that the cyclone will cross the coast at high tide.

The difference between strom surges and tsunamis

Storm surges and tsunamis are generated by quite different phenomena.  While both can cause inundation and significant damage in coastal regions, they have quite different characteristics.

A storm surge is generated by weather systems forcing water onshore over a generally limited stretch of coastline.  It wll normally build up over a few hours, as the cyclone or similiar weather system approaches the coast.  Normally wind-waves on tiop of the surge will contribute to its impact.

BEFORE a storm surge

Check the following websites for advise:

AFTER a storm surge